This week I'm delighted to present an interview with pre-Shortzian and Shortz-era constructor John M. Samson, who is also the crossword editor of Simon & Schuster!  To read John's wonderful reminiscences, click here or on the Pre-Shortzian Constructor Interviews tab above.

This week's featured puzzle, "White Christmas," was constructed by John M. Samson.  The puzzle was published on December 20, 1992; edited by Eugene T. Maleska; and litzed by Barry Haldiman (or a member of his former team of litzers).  This impressive 21x crossword features seven rebuses of CHRISTMAS, a word so long that it had to be abbreviated to XMAS in the rebus squares to make the puzzle display well on XWord Info!  Nearly all the CHRISTMAS entries feel fresh and fun, though my favorite has to be HOW THE GRINCH STOLE CHRISTMAS.  How often do you get to see that in a crossword?  The only two theme entries that feel a little less solid are the partials THE CHRISTMAS (clued as "'___ Wife,' 1988 Robards TV film") and OF CHRISTMAS MY ("' . . . day ___ true love . . . '").  Nevertheless, I'm amazed that John was able to find so many entries containing Christmas and get them to interlock into a 21x grid so elegantly!  The nonthematic fill is also remarkably clean, given the constraints imposed by all the rebus squares—I especially like the entries ANTHILL, RUTABAGA, SQUINT, MANHOLES, HOT RODS, and SOIREES.  The entry that looked the most unusual to me is ORPHREY ("Gold embroidery"), which, according to Merriam-Webster, is ultimately derived from the Latin aurum (meaning "gold") and Phrygius (meaning "Phrygian").  INSTAR ("Top off a 19-Across [CHRISTMAS TREE]") also gave me pause, though I appreciate how John was able to tie it into the theme.  Last but not least, the clues were very nice—"Dumbo's were jumbo" for EARS left me riant!  In all, this is an excellent pre-Shortzian Sunday crossword with both a timely and well-executed theme.  The puzzle can be seen below with highlighted theme entries and fully spelled-out rebus squares or on XWord Info without highlighting and with easier-to-read rebus squares. 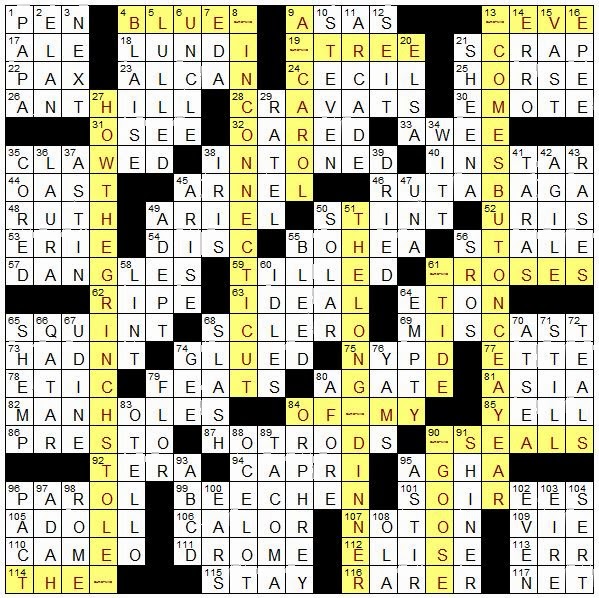 In other news, my list of clever clues from mid-to-late 1960s Farrar puzzles keeps on growing!  Here are five of my favorites from a few batches of 1965 puzzles litzed by Mark Diehl:
Clues like these are part of what makes looking through the pre-Shortzian puzzles so much fun!  Here's a picture of aardvark (in its natural habitat rather than at a picnic!):

Posted by David Steinberg at 5:10 PM