October Litzer of the Month Ed Sessa, Plus Martin Ashwood-Smith on Vaughn Keith

It's been another busy week, starting off with 19 puzzles from Mark Diehl that had 19 mistakes.  Saturday afternoon he sent 33 more with 38 mistakes, then later on 27 more with 8 mistakes, 16 with 35 mistakes, and 6 with 2 mistakes!  Sunday morning, Mark sent another 31 with 16 mistakes, then later that afternoon, an additional 30 with 16 mistakes.  Late Monday night Todd Gross sent in 16 puzzles with 20 mistakes, which were followed by 31 more from Mark late Thursday afternoon with 15 mistakes.  And this week Howard Barkin sent 31 puzzles with 24 mistakes.  Thanks so much, everyone—though some puzzles from 1967, 1968, and 1969 are still out with proofreaders, quite a few from 1966 have already come in!  And as I write this, Mark still leads in the Pre-Shortzian Proofreading Challenge, with 621 found mistakes—congratulations, Mark!

I'm delighted to announce that Ed Sessa is the October Litzer of the Month!  In addition to being a New York Times constructor and retired pediatrician, Ed is also a bird carver.  To read more about him, click here or on the Litzer of the Month tab above.

I recently received an e-mail from litzer and quad-stack constructor extraordinaire Martin Ashwood-Smith, who had been wondering about Maleska-era constructor Vaughn Keith, "one of the early (if not the earliest) masters of the triple stack genre."  Martin had found an obituary from 1990, which you can link to here, and wrote:


He was a school teacher who died at the young age of 40 of AIDS. The obit shows that this talented man faced his death with great bravery. The obit speaks for itself. Very sad, and also inspiring.

Vaughn Keith was a classicist who seems to have led a fascinating life.  Thanks so much again for this great find, Martin!

Today's featured puzzle, whose constructor is unknown, was published March 22, 1961; edited by Margaret Farrar; and litzed by Ralph Bunker.  Each of this puzzle's theme entries is a TV or movie reference that contains at least one title, such as MRS MINIVER (clued as "Theatrical headliner of 1942.").  Having each theme entry be a TV/movie reference adds a nice level of consistency to the puzzle, and I especially appreciate that none of the titles is directly repeated.  My favorite theme entry is MR PENNYPACKER ("Theatrical headliner of 1959."); even though I'm not familiar with the movie The Remarkable Mr. Pennypacker, the words are so much fun to say!  The nonthematic fill also seems pretty solid—I especially like the entries SANTA MARIA, KNIGHTHOOD, and END TABLE, and the only rather iffy piece of fill is the plural RT HONS ("Titles for some civic officials.").  Clues that pique my interest include "Abbreviation useful in the 1800's." for TERR and "Piquancy (from French for orange peel)." for ZEST.  Overall, this puzzle, with its cute theme and minimal reliance on obscurities, is a zesty gem from the early '60s!  The answer grid (with highlighted theme entries) can be seen below: 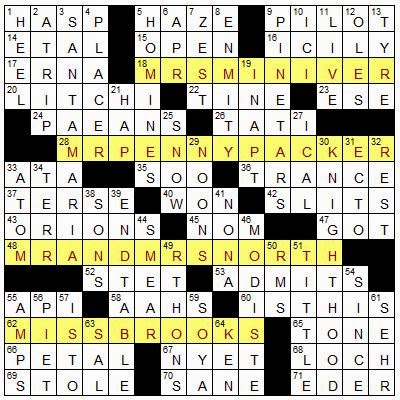 Posted by David Steinberg at 4:25 PM