1968 Puzzles Up, Plus Todd Gross on Louise Earnest and Eileen Lexau

Great news:  The 1968 proofread puzzles are now up on XWord Info and, as usual, beautifully displayed by Jim Horne!  We've now proofread 26 years; I'm currently sending out puzzles from 1961 to 1966, and the first puzzles from the 1950s should go out for proofing soon!

She was born Louise Seifert in September of 1915 in York County, PA.  She married William Earnest in nearby Dover, where they lived for a time raising their two children before moving to Warwick, NY.

The above photo is from an article in the Warwick Valley Dispatch, announcing a showing of her artwork in September, 2005 on her 90th birthday.  Another article from the Dispatch, which you can read here (p. 10), gives more details about her life, including her work as a crossword constructor.

It appears Ms. Earnest is still alive—at the age of 99!—and living in Warwick.  If so, she could become the second centenarian pre-Shortzian constructor late next year.

Great find, Todd!  The Dispatch article notes that Louise Earnest has "an extensive library and hundreds of the crossword puzzles she constructed have been published in the Daily and Sunday 'New York Times,' in Margaret Farrar's books, pocket books and Will Weng's collections"; she also "won prizes in Bantam's Great Crossword Puzzle Hunt."  A fascinating portrait of a legendary pre-Shortzian cruciverbalist!

Eileen Lexau
Todd also found a great piece on Eileen Lexau, who, according to my records, published 17 puzzles in the pre-Shortz era (and, per XWord Info, 10 in the Shortz era).  Todd reports:

She was born Eileen Agnes O’Hara in 1927 in St. Paul Minnesota.  Her long and rich life is summarized in her obituary here and a follow-up Pioneer Press article on 27 Nov (citation in Pre-Shortzian Constructors), I’ll just hit the highlights.  She was born and bred Catholic, graduating from the College of St. Catherine in 1948, working for Catholic Worker in New York City after graduation, and returning to St. Paul to become an assistant editor at Catholic Digest, where she met Henry Lexau.

They married in 1952, raising six children.  In 1970, with her children grown, she worked for several Minnesota state agencies, including the Dept. of Natural Resources, where she retired from in 1990.  She passed away in November of 2004.

The follow-up article mentions it would “take Lexau anywhere from several days to several weeks to perfect a crossword puzzle, and she didn't mind sharing the half-finished product with her family.”

Another great find, Todd!  Eileen Lexau had apparently said the following about crossword construction to the St. Paul Pioneer Press two years earlier:  "'It's absorbing.  It takes you out of yourself.'"  One of her daughters, Elizabeth, noted that Eileen "didn't make a great deal of money at it, but it gave her joy."  Thanks so much again for all this terrific research, Todd!  And thanks, too, to George Barany, Nancy Herther, and Jon Jeffryes, who helped locate some of this material.

This week's featured puzzle, whose constructor is unknown, was published June 25, 1960; edited by Margaret Farrar; and litzed by Ralph Bunker.  The puzzle contains six symmetrically interlocking theme entries that either start or end with a type of seafood; as a bonus, none of the theme entries directly relates to its original seafood variety.  The theme set feels fresh (pun intended!)—I especially like the entry LITTLE SHRIMP (clued as "Insignificant one")!  Although I'd never heard of LOBSTER TRICK ("On a newspaper, the sunrise watch.") before looking through this puzzle, I appreciated learning this colorful phrase.  However, MUSSULMAN ("Mohammedan.") bothers me a bit since it's the only theme entry that contains a homophone of a type of seafood rather than the seafood itself.  I also think the puzzle would have been even stronger if all the theme entries had started with a type of seafood or if there had been more of a balance of theme entries that started with a type of seafood and ones that ended with a type of seafood.  Nevertheless, I always appreciate seeing puzzles with solid themes in an era in which almost all daily puzzles were themeless, especially when they relate to what I had for dinner (shrimp scampi)!  The nonthematic fill, although peppered with uncommon letters, feels a bit chewy (again, pun intended!) in places—I can imagine that the SPEZIA ("Italian city (with "La"))/UZBEG ("Native of Turkistan.") crossing stumped many solvers, and I wasn't thrilled to see the crosswordese-y AYRE ("Point on the Isle of Man."), the technical legal term ADEEMS ("Revokes legally."), or the minor city ARMONK ("Village north of White Plains.").  The inclusion of RECIPE at 41-Down is a nice touch/thematic tie-in, however, and seeing a handful of J, X, and Z words that don't show up as often in crosswords is refreshing.  In all, this is an above-average pre-Shortzian puzzle in terms of theme, with numerous rare letters to keep things lively!  The solution grid (with highlighted theme entries) appears below: 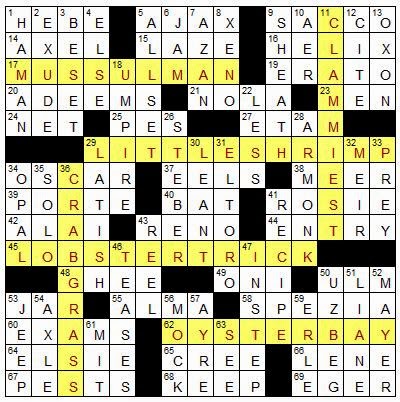 Posted by David Steinberg at 7:55 PM