Spooky End to the Pre-Shortzian Proofreading Challenge?, Blast! from the Past, and More Louise Earnest and Eileen Lexau Photos

Happy Halloween!  We're in the final hours of the Pre-Shortzian Proofreading Challenge, and if you take a look at the Contest Totals page, you'll see that Mark Diehl is in the lead, with nearly 1,700 found mistakes (congratulations, Mark!)!  But could that change between now and midnight—might a ghost proofreader suddenly overtake him?  We'll have to wait and see—I'll announce the final results in a special post tomorrow!

New Feature: Blast! from the Past

The new feature is Blast! from the Past—if you were a fan of the PS Stumpers on Twitter (see @pspuzzleproject), be sure to check out Blast!  Each week a new Blast! challenge will appear in the sidebar where the Litzer of the Month announcement used to be.  If you think you know the answer, e-mail it to me at preshortzianpuzzleproject at gmail dot com (using the usual format).  Unlike with the PS Stumpers, though, you only get one guess (and no extra hints!), so be sure it's your best!  There are no prizes, but there'll be fame and glory if you win:  The following week, I'll post the name of the first person to send in the correct response here and on Twitter and Facebook.  (If you're the first but you'd rather remain anonymous, that's fine too—just let me know!)  Good luck!

Following up on last week's post about Louise Earnest and Eileen Lexau, Todd Gross found a couple of group shots of these two pre-Shortzian icons.  I've edited the photos so they contain just the constructors themselves:


Thanks so much again for these new photos, Todd!

Today's featured puzzle, whose constructor is unknown, was published October 31, 1968; edited by Margaret Farrar; litzed by Martin Herbach; and proofread by Mark Diehl.  For those of you who want to take a crack at this puzzle before reading on, it's available on XWord Info.  The puzzle contains four symmetrically interlocking theme entries that are appropriate for Halloween but that don't necessarily relate to this spooky holiday, such as A GHOST OF A CHANCE.  Two of the theme entries, GRAVEYARD SHIFTS and CHRISTMAS SPIRIT, are Halloween-ized in their clues as "Costumes for tonight." and "Out-of-season spook, maybe.," respectively.  The central down theme entry, TRICK OR TREATS ("Slogans for tonight."), is a somewhat awkward plural, though I really admire how nicely it crosses the central across theme entry and holds the puzzle together.  The nonthematic fill also feels somewhat spirited, with the frightful-yet-lively entries SILENCER, STARK, ASTART, TROUNCE, and PSYCH; also, the INHALANT/NONUSER crossing is reminiscent of a Halloween party that has run afoul of the long arm of the law!  Neither INHALANT nor NONUSER is clued in connection with drugs, though this crossing is nevertheless curious.  Spooky entries aside, the puzzle contains a handful of additional fresh words and phrases, such as ICEBERG, TOE DANCE, and TIE BAR.  Going back to the Halloween theme of today's post, there are also a few pieces of fill on the grisly side, such as the six-letter partials, ONE TOO and SPEED A; RECRAM ("Study for another exam."); and ESTHS (which seem to be much more well known as Estonians).  The timeliness of the theme and the multitude of creepy entries/clues make up for these blemishes, though, and the puzzle thus feels quite strong overall.  The puzzle can be viewed and further analyzed on XWord Info; as usual, the answer grid (with highlighted theme entries) can be seen below: 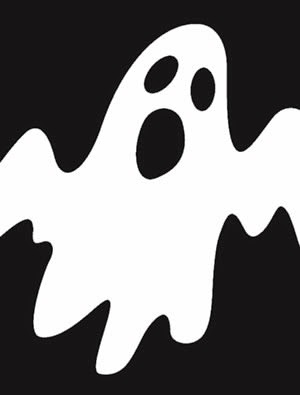 Or can it?  MWAHAHAHA! 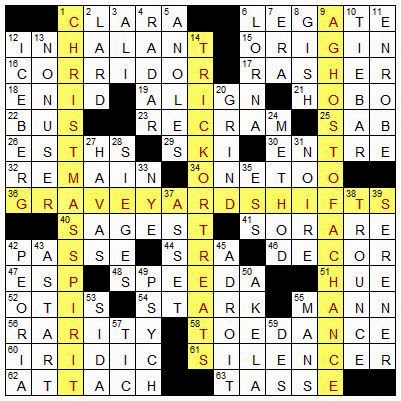 Posted by David Steinberg at 5:34 PM