In the Farrar Era—and Mark Diehl Passes 1,000 in the Pre-Shortzian Proofreading Challenge

In the Farrar Era

Last week XWord Info's Jim Horne pointed out that with the last installment of proofread puzzles on XWord Info—1969—we were now finished with the Will Weng puzzles and into the Margaret Farrar era, which began on February 15, 1942.  Indeed, the last puzzle Farrar edited was the January 5 Sunday opus by Frances Hansen, appropriately titled "Ring in the New"—not only for the New Year but also for the new editor, Will Weng.  On that day, the Times published a lengthy announcement of Farrar's retirement, noting that, at 71, she was currently editing her 97th crossword puzzle collection for Simon & Schuster and had edited 18 puzzle books for the Times.  The full text of this fascinating article, which contains several amusing anecdotes and reminiscences by Farrar, is available through libraries on ProQuest.


Several weeks later, on January 26, the Times published the following particularly charming letter from a reader:


Fortunately for us, we're working backwards in time, so rather than bidding adieu to Margaret, we're heralding in her era!

Today's featured puzzle, whose constructor is unknown, was published on July 16, 1960; edited by Margaret Farrar; and litzed by Ralph Bunker.  This eye-catching 64-word themeless is ambitious, wide open, and beautifully filled—in fact, the puzzle doesn't have a single entry that feels particularly obscure, and there are only a couple of short entries that seem subpar (ESNE and LIGNE), both of which appeared in numerous other pre-Shortzian and Shortz-era crosswords.  I don't think I've come across a single pre-Shortzian puzzle that contains this few iffy pieces of short fill!  The upper right and lower left corners are particularly aesthetically pleasing:  In addition to incorporating only 6-, 7-, and 8-letter entries, these corners have a smattering of Scrabbly letters and contain numerous fun, in-the-language entries, such as CRAVAT, RIPPLE, PELLET, CRIMEA, and the IMPALE/IMPALA crossing.  Other highlights in the grid include MAN EATER, DRESSING ROOMS, and TROLLEY; admittedly, none of these entries knocks my socks off, but I really appreciate how cleanly they interlock.  I'm not as fond of CIGARETS (as opposed to CIGARETTES), and I've never heard of a MUSK TREE (clued as "Highly scented Australian plant."), but I'm just nitpicking at this point.  The clues also have a nice amount of spice—"Favorite beatnik word." for LIKE and "'All men are ___'" for LIARS particularly tickle me.  I find it fascinating that the word like has been prevalent in our dialect for more than 50 years—nowadays, like has become so commonplace that it's frequently used as a conversation filler!  In all, this is a masterful pre-Shortzian construction, and I look forward to locating additional gems as I finish looking through litzed puzzles from 1960.  Now that the wheels of the proofreading machine are spinning so fast, I have a feeling the Pre-Shortzian Puzzle Project in its entirety will be complete before I achieve my personal goal of looking through every New York Times crossword in detail!  For now, here's the solution grid for this week's featured puzzle: 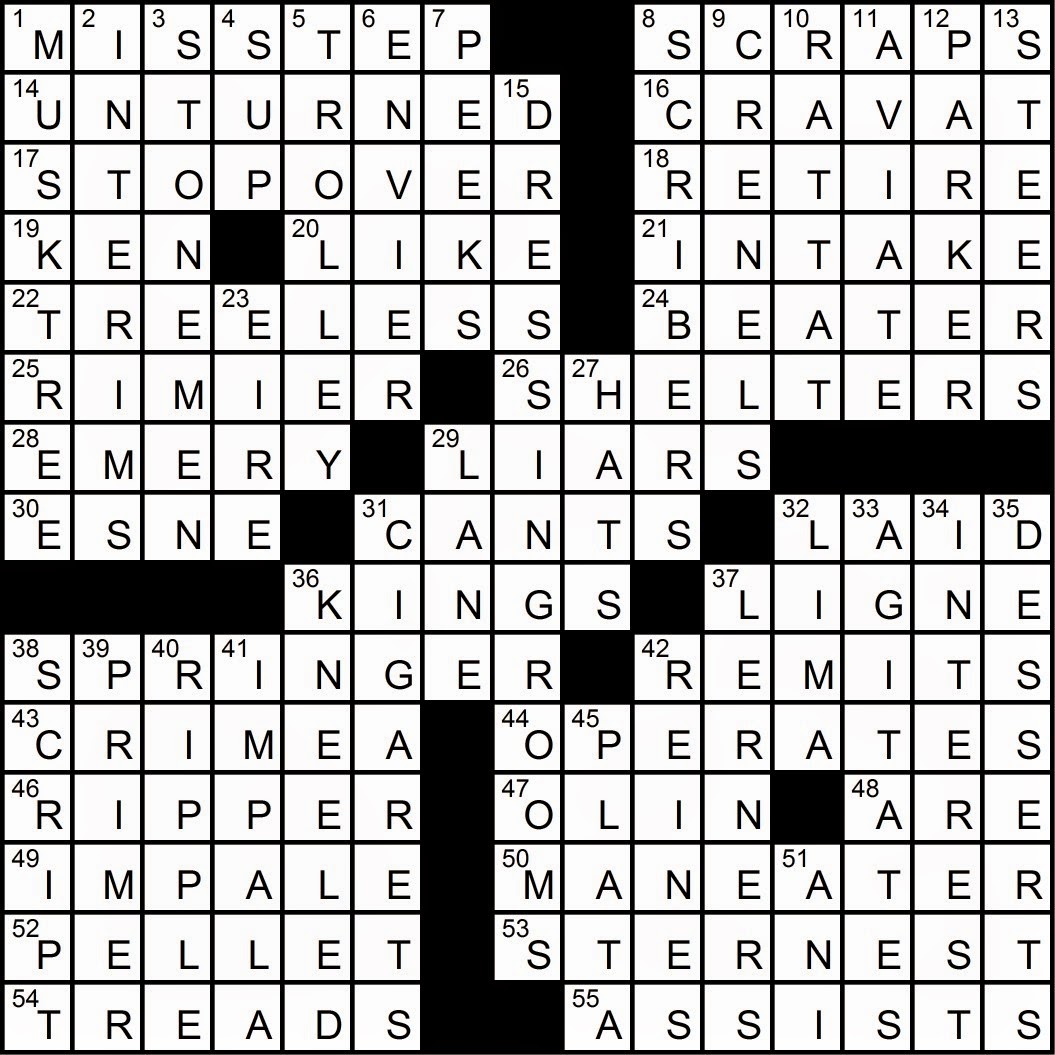 Posted by David Steinberg at 4:56 PM