More good news:  The Pre-Shortzian Puzzle Project has received some additional publicity!  Deb Amlen recently blogged about the project on Wordplay—you can read her wonderful piece here!  It provides a great summary of the project.

In addition, while continuing to match Margaret Farrar daily puzzle authors with their puzzles, I've come across several names I suspect are fake:  Hume R. Craft (6/16/1959, 8/13/1959, etc.), Anna Gram  (7/25/62), and Mary Land (8/24/59).  Hume R. Craft is probably a pun on "humor craft," though I'm not sure.  However, I do know for certain that Anna Gram was one of Margaret Farrar's pseudonyms.  In fact, she even confirmed my suspicions in her introduction to Eugene T. Maleska's Across and Down!  Mary Land could have been another Margaret Farrar pseudonym, though I haven't found anything to back me up on this one.  In addition to these three names, I also know that Charles Cross wasn't a real person—several books mention that Margaret used this pseudonym when she published two puzzles by the same constructor very close together.  Finally, another one of my crossword books mentions that Sam Lake was an anagrammatic alias of Eugene T. Maleska.  That's all I know or have deduced about pre-Shortzian pseudonyms at the moment—if anyone finds support that Hume R. Craft and/or Mary Land were real people or knows of any other pre-Shortzian pseudonyms not included in this list, please comment!

While continuing to proofread, we discovered another funny error:  A clue for BEGUMS was supposed to read "Widows of agas" but had accidentally been typed as "Windows of agas"!

Today's featured puzzle, "Wondrous Maze," was constructed by Timothy S. Lewis.  It originally appeared on June 2, 1991, and was litzed by Barry Haldiman (or one of his former litzers).  This puzzle  has a very unusual stepquote theme.  The first stepquote, consisting of 6-Across, 11-Down, and 146-Across, reads "MINE IS A LONG AND SAD TALE," SAID THE MOUSE.  The second stepquote, consisting of 49-Down, 112-Across, 79-Down, 79-Across, 44-Down, 44-Across, and 45-Down, reads "IT IS A LONG TAIL CERTAINLY," SAID ALICE, "BUT WHY DO YOU CALL IT SAD?".  The stepquotes are both symmetrically placed in the grid and intersect each other in the center, which is very elegant and impressive.  On top of all of this, the puzzle contains the four bonus theme entries RABBIT HOLE, WONDERLAND, ALICE LIDDELL, and LEWIS CARROLL!  Finally, the nonthematic fill is very clean (especially considering the complexity of the theme).  I especially like the entries TOMBOY, PALAVER, and the awesome-sounding DIRNDL!  The answer grid (with highlighted theme entries) can be seen below; the complete puzzle can be seen here on XWord Info. 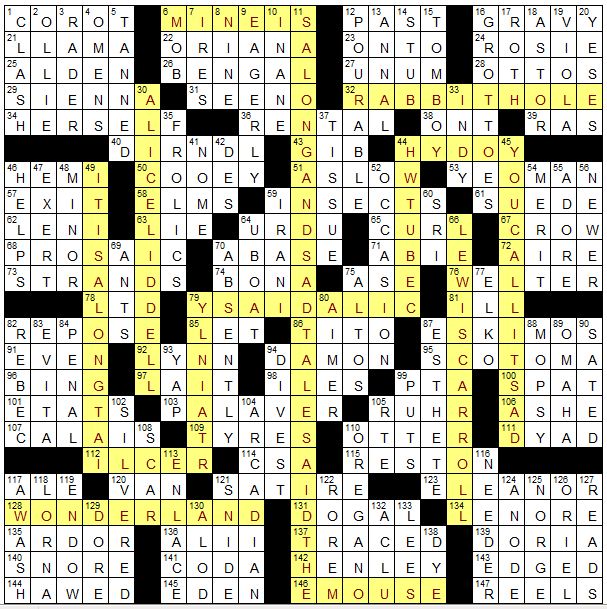 Image courtesy of IMDb.
Posted by David Steinberg at 9:03 PM