I'm thrilled to announce that more than 2,000 puzzles have been litzed so far!  A few days ago, litzer Mark Diehl finally pushed us over this milestone.  We are now approximately 1/8 done with all the litzing, which is mind-blowing!

As many litzers have noticed, I've been sending out puzzles from the 1950s for litzing.  I sent these puzzles because I was out of town for two weeks and hadn't downloaded enough 1990s puzzles to satisfy such a great demand!  I figured that the rest of 1991 would be enough to last two weeks, but I couldn't have been more wrong.  In addition to the 1991 puzzles, I ended up needing more than 15 additional weeks to send out!  The 1950s puzzles have been very interesting so far.  Though many of them were themeless, some had surprisingly elegant themes.  One particular puzzle, which will be featured in a future blog post, had nine interlocking theme entries and very little crosswordese!  This is still incredible by today's standards.

Finally, litzer Vic Fleming is dedicating three of his "I Swear!" columns, which can be seen in the Daily Record and other Southern newspapers, to the Pre-Shortzian Puzzle Project!  I've had the pleasure of reading two of them in advance, and they are wonderfully written and a lot of fun to read!  I'll be posting links to them as they're published over the next few weeks.

As promised, today's featured puzzle is another Ronnie K. Allen masterpiece.  It was originally published on April 20, 1991, and was recently litzed by Jeffrey Krasnick.  In addition to having a fun letter insertion theme (WENT OUT ON A LIMBO [clued as "Took a chance with a dance?"] and BUY A PIG IN A POLKA [clued as "One way to get Polish sausage?"] ), this puzzle also uses the rare 13-/14-/15-letter stacking pattern.  Though I wasn't fond of all of the long adverbs in the bottom section, the fill sparkled for a Maleska puzzle.  WEATHER CHARTS, STARSKY, and SARDONIC are all excellent entries!  The answer grid (with highlighted theme entries) can be seen below: 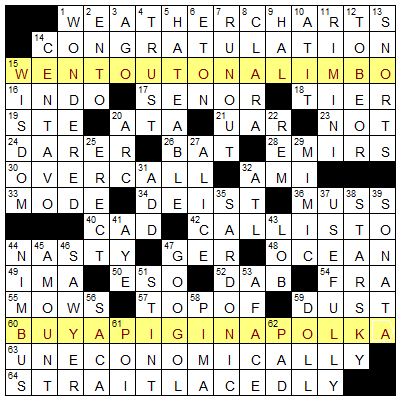 Today's featured pre-Shortzian entry is TOMBOLOS.  According to the Ginsberg database, neither TOMBOLOS nor TOMBOLO has been reused in a Shortzian puzzle.  TOMBOLOS originally appeared in the October 30, 1991, puzzle by Bert Rosenfield, which was litzed by Peter Broda.  The clue for TOMBOLOS was "Island-to-mainland sandbars."  Webster defines a tombolo as "a sand or gravel bar connecting an island with the mainland or another island."  Tombolo comes from Italian but can more specifically be traced to the Latin word tumulus, which means "mound."  Tombolo was introduced to our language in 1899.  Below is a picture of a tombolo. 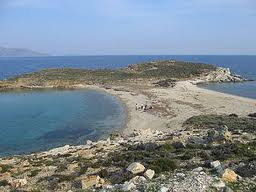 Image courtesy of Wikipedia.
Posted by David Steinberg at 8:07 PM