I've added a couple of new pages to the Pre-Shortzian Puzzle Project website over the past few days.  The first is Litzer Totals, which contains the total number of puzzles each litzer has litzed.  I'll try to update it as frequently as I can.  Thanks, everyone, for all your work!  If each constructor in the crossword community litzed just one puzzle, we could probably finish litzing two years' worth of puzzles in just a few days!  Each and every puzzle counts—not everyone has the time to do more than a puzzle or two, which is just fine!

The second new page on our website is Pre-Shortzian Editors, which has short blurbs about Margaret Petherbridge Farrar, Will Weng, Eugene T. Maleska, and Mel Taub (the interim editor before Will Shortz).

Today's featured pre-Shortzian puzzle was constructed by Eugene T. Maleska.  It was originally published on November 29, 1991, and was recently litzed by Andrew Feist.  The puzzle had two clever theme entries (MCE MCE MCE and TRN TRN TRN).  The clues for them were "THREE BLIND MICE [the MCEs represent mice with no Is—thus, phonetically, they are blind]" and "NO U TURNS [the TRNs represent turns with no Us—thus, they are no-u turns]."  There was also some nice nonthematic fill, such as WEAK SISTER and DIETICIAN.  Finally, I really liked all the Vs in the central section of the puzzle.  The answer grid (with highlighted theme entries) can be seen below: 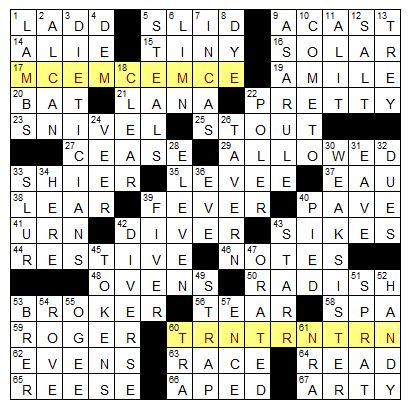 Today's featured pre-Shortzian entry is KIMURA.  According to the Ginsberg database, KIMURA has never been reused in a Shortzian puzzle.  It originally appeared in the April 25, 1992, puzzle by Tap Osborn, which was litzed by Doug Peterson.  The clue for KIMURA was "Japanese astronomer."  KIMURA refers to the Japanese astronomer Hisashi Kimura, who lived from 1870 to 1943.  Wikipedia says that Kimura studied and measured variations in latitude.  In 1936, he won the prestigious Gold Medal of the Royal Astronomical Society.  A crater on the moon and an asteroid were named in his honor.  Below is a photo of Kimura on a Japanese stamp: 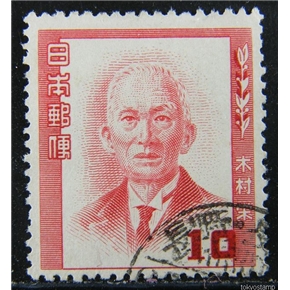 Photo courtesy of the Tokyo Stamp Company.
Posted by David Steinberg at 8:14 PM