Advisory Board, Plus 1993 Pre-Shortzian Puzzles on XWord Info

Today's featured puzzle was constructed by Ronnie K. Allen.  It was originally published on October 26, 1991, and was recently litzed by Andrew Laurence.  Not only is this puzzle one of the only double tri-stacks published under Maleska, but it also has a subtle pun theme (which dentist/litzer Mark Diehl would likely appreciate):  DENTAL TELEPATHY plays off of mental telepathy, and CLARE TOOTH LOOSE plays off of the author Clare Boothe Luce.  The fill is remarkably clean (HIBACHI, LAUGHTER, and ADVERB are fantastic), and all four nonthematic spans feel "in the language."  I wasn't as fond of MALAYSIAN LEADER, but it still felt legitimate.  The answer grid (with highlighted theme entries) can be seen below: 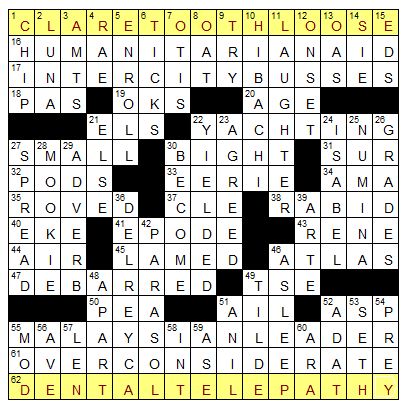 According to my records, Ronnie K. Allen published just two other pre-Shortzian New York Times crosswords.  Jeffrey Krasnick recently finished litzing one of them, and it was equally impressive!   I will be featuring it in the next post.

Today's featured pre-Shortzian entry is LATHI.  According to the Ginsberg database, LATHI has never been reused in a Shortzian puzzle (though it has appeared in several Universal crosswords).  It originally appeared in the August 1, 1993, puzzle by Martin Fass, which was litzed by Barry Haldiman (or one of his former litzers).  The puzzle can be seen on XWord Info here.  The clue for LATHI was "Punjabi policeman's club."  Webster defines a lathi as "a heavy stick often of bamboo bound with iron used in India as a weapon esp. by police (as in dispersing a crowd or quelling a riot)."  Below is a picture of lathis in two different sizes.