Amazingly enough, we're already litzing puzzles in 1991!  Just last week, before I announced the Pre-Shortzian Puzzle Project, we were still in December 1992.  It's amazing how the crossword puzzle community has come together and made so much progress in such a short period of time.  At this rate, we'll be litzing the last few puzzles of 1942 in a few years!

Litzer Vic Fleming shared a very useful tip to speed up time and increase accuracy when entering the author, editor, and copyright into the information field.  He suggested saving the following template into Crossword Compiler (or other program) for litzing Maleska-edited puzzles:

Thanks for this great tip, Vic!

Today's featured pre-Shortzian puzzle was constructed by Timothy S. Lewis.  It was originally published on March 21, 1992, and was recently litzed by Mark Diehl.  Both Mark and I liked how BENJAMIN/DISRAELI symmetrically intersects with one of Disraeli's quotes.  This must have been a very lucky coincidence for Timothy S. Lewis—it's extraordinary that he was able to pull that off!  Plus, in addition to the quote and author, he also included the titles of two books that Benjamin Disraeli wrote:  Tancred and Lothair!  On top of all of this, the fill was relatively clean for a Maleska puzzle (with the exceptions of MINIE balls, the partial TRIAL BY, and SCYE).  The answer grid (with highlighted theme entries) can be seen below: 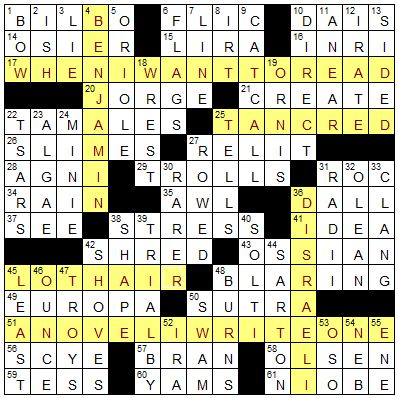 Today's featured pre-Shortzian entry is SCISSEL.  According to the Ginsberg database, SCISSEL has never been reused in a Shortzian puzzle.  It originally appeared in the September 21, 1950, Margaret Farrar–edited puzzle, whose author we don't know yet.  The clue for SCISSEL was a real mouthful:  "Plates of metal with circular blanks after cutting for coinage."  Webster defines SCISSEL as "metal scrap clippings left over in various mechanical operations; esp. the remnants of fillets from which coin blanks have been punched."  Below is a picture of scissel:

Photo courtesy of the Canadian Numismatic Publishing Institute.
Posted by David Steinberg at 6:43 AM