Recently the Pre-Shortzian Puzzle Project got two nice doses of publicity!  First, litzer Peter Broda announced the project on his blog, The Cross Nerd (http://thecrossnerd.blogspot.com/).  Then Tyler Hinman posted a tweet about the project (https://twitter.com/thatpuzzleguy).  Thanks so much, Peter and Tyler!

And now, here's a funny story about the website.  A few days ago, litzer Barry Haldiman told me that his workplace had blocked it for "potentially damaging content."  He then joked that I must be a "budding hacker"!  I replied that Barry's workplace must have considered the picture of the worker with a shaduf "overly revealing."

Today's featured pre-Shortzian puzzle was constructed by Alfio Micci.  It was originally published on May 8, 1992, and was recently litzed by Brad Wilber.  The theme entry GO DOWN ONE SIDE read in the down direction, and the theme entry AND UP THE OTHER read in the up direction!  This sprinkling of thematic material allowed for many lively entries, such as PANACHE, SHREWISH, EGGPLANT, and FLOODGATE.  I like how Alfio Micci thought outside the box when constructing this one!  The answer grid (with highlighted theme entries) can be seen below: 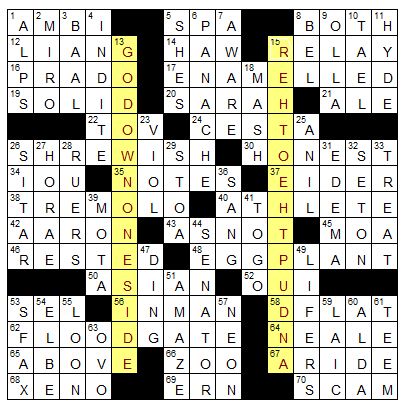 Today's featured pre-Shortzian entry is SKATOLES.  According to the Ginsberg database, SKATOLES has never been reused in a Shortzian puzzle.  It originally appeared in the September 12, 1992, puzzle by Tap Osborn, which was litzed by Angela Halsted.  The clue for SKATOLES was "Perfume fixatives."  Webster defines a skatole as "a foul-smelling compound C9H9N found in the intestines and feces, in civet, and in several plants or made synthetically and used in perfumes as a fixative."  I don't think I'm ever going to think of perfume in the same way after reading this definition!  Below is a representation of a skatole's molecular structure. 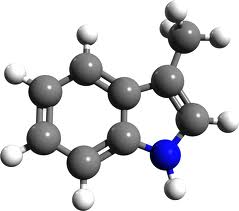 Image courtesy of Wikipedia.
Posted by David Steinberg at 4:13 PM