Off to a Great Start!

Happy Fourth of July!  As the post title says, we're off to an excellent start on the Pre-Shortzian Puzzle Project!  Between this post and the previous one, 73 more puzzles have been litzed (or are about to be litzed).  Several litzer biographies and pictures, as well as July's Litzer of the Month interview with Barry Haldiman, now appear on this website.

Today's featured pre-Shortzian puzzle was constructed by Tap Osborn.  It was originally published on March 27, 1992, and was recently litzed by Nancy Kavanaugh.  I find this puzzle particularly interesting because it had ten mostly symmetrical theme entries, several of which interlock.  This is amazing for a 1992 puzzle—and still would be by today's standards.  In case you're wondering, each theme entry is a movie that won an Oscar.  The fill was somewhat compromised by the high theme density (OESE, clued as "Bacteriologist's wire," is bad), but I hope to see many more puzzles like this one!  The answer grid (with highlighted theme entries) can be seen below: 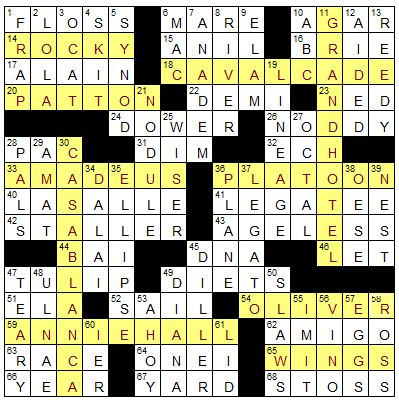 Today's featured pre-Shortzian entry is SHADUF.  SHADUF, according to the Ginsberg database, has never been reused in a Shortzian puzzle.  It originally appeared in the May 2, 1992, puzzle by Jesse Roarke, which was litzed by Vic Fleming.  The clue for SHADUF was:  "Irrigation device: Var."  Webster defines a shadoof (the primary spelling) as "a counterbalanced sweep used since ancient times especially in Egypt for raising water (as for irrigation)."  Below is a picture of a worker using a shadoof:

Posted by David Steinberg at 8:49 PM