Back in the Maleska Era, Commenting, Sunday Puzzles, and an Interesting Article

I'm pleased to announce that we're now litzing puzzles in the Maleska era again, this time in 1990!  We blasted through several months of Margaret Farrar puzzles, increasing the total number of litzed puzzles from just over 2,000 to just under 2,200.  Keep up the great work, everyone—before we know it, we really will have only Margaret Farrar puzzles left to litz!

Also, feel free to leave comments on the blog posts!  Since I moderate all comments, they may not display immediately, though.  Please keep the comments positive and on the topic of crosswords, litzing, or the Pre-Shortzian Puzzle Project in general.

I've recently started including Sunday puzzles in PDF packets.  So far I've seen some very cool pre-Shortzian Sundays, including a crossword/cryptogram combo constructed by Eugene T. Maleska and a puzzle with the letter A removed from every entry in the style of a vowelless variety puzzle!

A few days ago I discovered a very interesting New York Times article about pre-Shortzian constructors and editors, which you can see here.  The article, originally published in 1988, discusses the style differences between traditionalist editors, such as Eugene T. Maleska and William Lutwiniak, and the so-called new wave editors, such as Will Shortz and Stan Newman.  My favorite part of the article is the "Oreo War" paragraph.  I'm so glad I no longer see the pre-Shortzian clues for OREO anymore!  For those of you who are curious, below is a picture of an oreortyx. 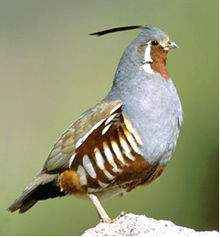 Today's featured pre-Shortzian puzzle was constructed by Herbert Ettenson.  It was originally published on May 29, 1954, and was recently litzed by Mark Diehl.  Amazingly, this puzzle included eight symmetrical theme entries!  Each theme entry was clued as "Nonsense."  My favorite theme entries are FLAPDOODLE and GALIMATIAS because they sound so cool!  In addition, the puzzle included the semi-theme entry YAKS, which was clued as "Talks nonsense: Slang."  On top of all of this, the fill was remarkably clean.  GODSPEED and MESS HALL are terrific entries! 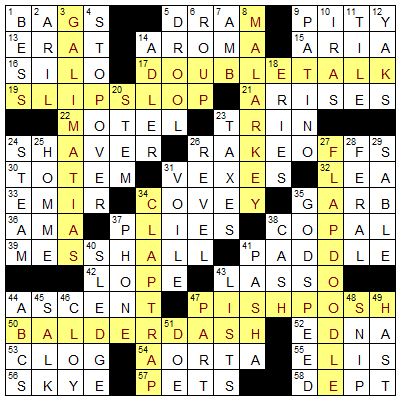 Today's featured pre-Shortzian entry is CINCHONA.  According to the Ginsberg database, CINCHONA has never been reused in a Shortzian puzzle.  It originally appeared in the September 30, 1992, puzzle by Joy L. Wouk, which was litzed by Dan Schoenholz.  The clue for CINCHONA was "Quinine-supplying tree."  Webster lists two definitions of cinchona: "any of a genus (Cinchona) of South American trees and shrubs of the madder family" and "the dried bark of a cinchona (as C. Ledgeriana) containing alkaloids (as quinine) and formerly used as a specific in malaria."  Cinchona comes from New Latin but more specifically from the name of a Peruvian viceroy's wife dubbed "The Countess of Chinchón."  Below is a picture of a cinchona. 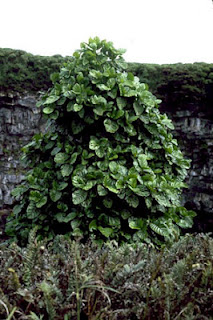 Posted by David Steinberg at 6:01 PM