1991 Puzzles Up on XWord Info, Now in 1985, New Litzers, Another Humorous Typo, and an Update on Patterson Pepple

Great news:  All the 1991 puzzles are now posted on XWord Info!  Jim Horne and I are still working on getting a few rebus puzzles to display correctly, but the others are ready for viewing (and solving!).  Thanks so much, Jim!

In other news, litzer Mark Diehl just pushed us into 1985, which is terrific!  We've also added a couple of new litzers (welcome!)—we're moving through the Maleska era at a rapid clip!

We discovered another humorous typo while proofreading the 1991 puzzles.  A clue for ICON was supposed to read "Sacred image" but had accidentally been typed as "Scared image."  I'm sure there must be some scared icons. . . .

Today's featured puzzle, "The Anglo-Hebraic Way," was constructed by Bernard Meren.  It originally appeared on January 20, 1991, and was litzed some time ago by Nancy Shack, one of Barry Haldiman's group of litzers.  I didn't understand this puzzle's diabolical gimmick at first—I spent several minutes staring at the clues and answers before finally figuring it out.  Each theme entry is composed of two parts:  One reads from left to right (the Anglo way), while the other reads from right to left (the Hebraic way).  All the theme clues also read in two directions:  The Anglo direction clues the left-to-right part of a theme entry, while the Hebraic direction clues the right-to-left part.  For example, ACCENTEDSEIP is clued as "S T R E S S E D."  "S T R E S S E D" leads to the first part of the answer (ACCENTED); "DESSERTS" leads to the second part of the answer (PIES).  All the theme entries elegantly interlock, and the grid has some nice, open corners.  Because of the theme's complexity, some of the fill felt particularly strained (L. BALL, NAIANT, EILE, etc.).  Nevertheless, this is one of the most brilliant puzzles I've ever seen, certainly up there in complexity with this Charles M. Deber masterpiece.  The answer grid (with highlighted theme entries) can be seen below; the complete puzzle can be seen here on XWord Info. 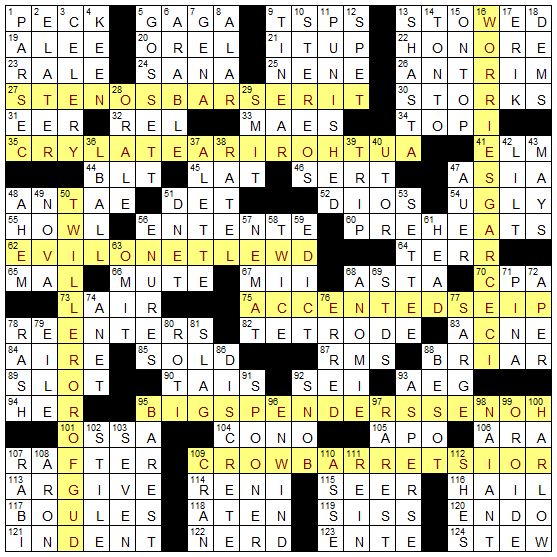 Today's featured pre-Shortzian entry is PRAHU.  According to the Ginsberg database, PRAHU has never been reused in a Shortzian puzzle.  PRAHU originally appeared in the May 31, 1986, puzzle by Patterson Pepple, which was recently litzed by Robert W. Jones.  After reading the comments on my last post, I'm concluding that Patterson Pepple was a real person (mainly because of this burial notice that tabstop found).  Anyway, the clue for PRAHU was "Malayan sailboat."  Webster lists prahu as a variant spelling of prau (another variant of prau is the crosswordese proa).  Webster defines a prau as "any of various Indonesian boats usually without a deck that are propelled especially by sails or paddles."  Prau comes from the Malay pĕrahu and was first introduced into our language in 1582.  Below is a picture of a prahu/prau/proa: 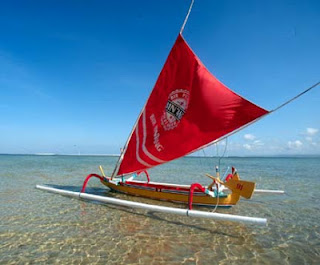 Image courtesy of the Bali Children's Project.
Posted by David Steinberg at 11:53 AM