I have some more big announcements!  First, litzer Vic Fleming's second column about the Pre-Shortzian Puzzle Project was published in today's Daily Record!  The column discusses many of the featured pre-Shortzian entries of the day; you can read Vic's piece here.

The project has also received a lot more publicity recently!  Jim Horne's announcement on CRUCIVERB-l gave us another two litzers, which is terrific.  Also, Amy Reynaldo announced the project on Diary of a Crossword Fiend here, and Wordplay blogger Deb Amlen and The Puzzle Brothers tweeted about our work!  Thanks, everyone!

Now that we're in August, we have a new Litzer of the Month:  Andrew Feist!  Andrew hit the ground running—and the 2,400 mark on our thermometer!  To read more about him, click here.

Before I get to the puzzle of the day, I thought I'd share a funny mistake I happened to catch while proofreading.  A clue for TSETSE was supposed to be "Ugandan pest," but it had accidentally been typed as "Ugandan priest"!  Litzing and proofreading are tough jobs, and everyone's been doing a great job!

Today's featured puzzle was constructed by Ralph G. Beaman.  It was originally published on April 7, 1990, and was recently litzed by Angela Halsted.  This puzzle has a very clever gimmick executed to a tee—exclamation points are actually parts of several answers in the grid, yielding a total of 13 theme entries!  In addition, the puzzle included the defining entry SCREAMER, which was clued as "This puzzle's theme, to a printer."  My favorite theme entry is TORA! TORA! TORA!, which has three exclamation points!!!  Because of this theme's complexity, though, some of the nonthematic fill feels strained (particularly ERYTHEMA [clued as "Skin redness"] and ALALIA [clued as "Mutism"]).  Nevertheless, the constructor still managed to include the terrific entries RICKRACK and BUSTY!  The answer grid (with highlighted theme entries) can be seen below: 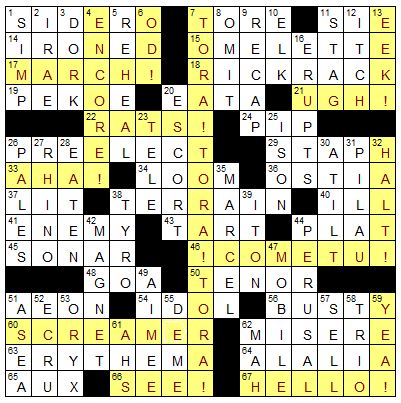 Today's featured pre-Shortzian entry is TERAI.  According to the Ginsberg database, TERAI has been reused in only one Shortzian puzzle from 1994.  It originally appeared in the February 16, 1990, puzzle by Peggy Devlin, which was recently litzed by Alex Vratsanos.  The clue for TERAI was "Hat worn for sun protection."  Webster defines a terai as "a wide-brimmed double felt sun hat worn especially in subtropical regions."  Terai comes from Tarai, a lowland belt of India, and was first introduced into our language in 1888.  Below is a picture of an officer wearing a terai: 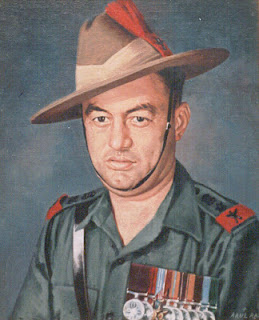 Image courtesy of the ODM Group.
Posted by David Steinberg at 12:44 PM