Almost Halfway through the Maleska Era, an Unusual Puzzle, and Patterson Pepple

I am very pleased to announce that we're almost halfway through the Maleska era!  The first puzzle Maleska edited was published on February 28, 1977.  We're making amazing progress—before you know it, we'll be in the Will Weng era!

Today's featured puzzle, "Space Saver," was constructed by Ralph G. Beaman.  It originally appeared on February 7, 1988, and was recently litzed by Jeffrey Krasnick.  This puzzle is the earliest example of a Schrödinger puzzle that I've come across.  A Schrödinger puzzle intentionally has more than one correct solution.  For example, in this puzzle, the single clue "Spied at the deli?" can lead to the answers PEEPED AT THE SPICED HAMS, PEERED AT THE SPICED HAMS, PEEPED AT THE SLICED HAMS, or PEERED AT THE SLICED HAMS.  The down clues also work in this fashion:  "Some standardbreds" can lead to PACERS or RACERS, and "Company niche" can lead to SPOT or SLOT.  What makes this puzzle different from other Schrödinger puzzles is that the Schrödinger squares themselves are indicated in the puzzle itself with slashes.  Also, the puzzle includes several Schrödinger clues—for example, 129-Across (RODE) is clued as "Took a ca(b/r)".  I don't think I've ever seen a puzzle, Shortzian or pre-Shortzian, with Schrödinger clues!  As for the Schrödinger entries, I think the three 21-letter spans are awesome (even though they could never be reused in a normal puzzle)!  The one thing that bothers me about the theme entries is that several of them rely on variants of the same word (such as INDUES/ENDUES).  Also, though there are some very nice entries in the nonthematic fill (such as LANCELOT, ORLANDO, and DISCUS), much of it was strained by the complexity of the theme (A DANCE, IS AGAIN, OLID, etc.).  Nevertheless, this is an amazing feat of crossword construction!  The answer grid with highlighted theme entries can be seen below: 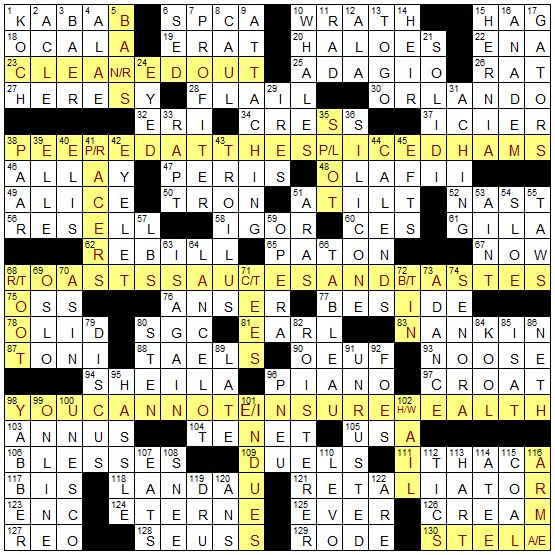 Today's featured pre-Shortzian entry is ATALA.  According to the Ginsberg database, ATALA has never been reused in a Shortzian puzzle.  ATALA originally appeared in the March 5, 1988, puzzle by Patterson Pepple, which was recently litzed by Joe Cabrera.  Since it is such an unusual name, several other litzers and I are suspicious that Patterson Pepple may have been one of Maleska's aliases.  For one thing, to my knowledge no other Patterson Pepple puzzles were published by any other New York Times editor.  Also, Patterson Pepple puzzles were almost always published either right before or after a puzzle by Maleska himself—or at least within the same week.  If anyone can weigh in on this (or come up with a possible anagram for Patterson Pepple), please comment!  Anyway, the clue for ATALA was "Book by Chateaubriand."  Below is Encyclopedia Britannica's writeup about the book, as well as a modern picture of the cover:

Atala, novel by François-Auguste-René, vicomte de Chateaubriand, published in French as Atala, ou les amours de deux savages dans le désert in 1801. It was revised and reissued with René in 1805. A portion of an unfinished epic about Native Americans, the work tells the story of a Euro-American girl who has taken a vow to remain celibate but who falls in love with a Natchez man. Torn between love and religion, she poisons herself to keep from breaking her vow. The lush Louisiana setting and the playing-out of romantic passion in primitive American surroundings are captured in a rich, harmonious prose style that yields many beautiful descriptive passages. 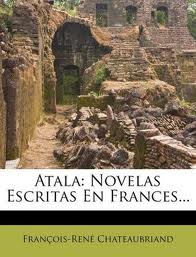 Posted by David Steinberg at 1:37 PM