Vic's Third Column, Litzing on the Go, Plus Another Humorous Error

Following up on last Friday's post, litzer Vic Fleming's third and final column about the Pre-Shortzian Puzzle Project appears in today's Daily Record!  The column lists some of the funniest (and most risqué!) Shortzian clues and entries.  For more, click here.

In other news, litzer Mark Diehl has shown just how versatile litzing can be, even on the go:  Coming back from a trip, he was planning to litz on the plane!  This just goes to show that litzing can be worked on almost anywhere, at almost any time!

While proofreading the 1991 puzzles, I happened to catch another funny mistake.  A clue for NEVIN was supposed to read "Composer Ethelbert ___" but had accidentally been typed as "Composter Ethelbert ___"!  Maybe Ethelbert Nevin was an early environmentalist too!

Today I'm featuring a duad (as pre-Shortzian editors might say) of puzzles.  These two puzzles break the basic rules of crossword construction.  Since many pre-Shortzian puzzles were asymmetric, I'm only featuring puzzles that violate the more major rules of construction.  The first puzzle, whose constructor is unknown, originally appeared on September 16, 1950, and was recently litzed by yours truly.  Oddly enough, the puzzle has a pair of two-letter nonthematic entries in it, SM and NS!   Aside from this flaw, though, the fill is interesting and Scrabbly.  I especially like the entries SERENDIPITY, MAJORCA, and SILVERY.  The answer grid with highlighted two-letter entries appears below: 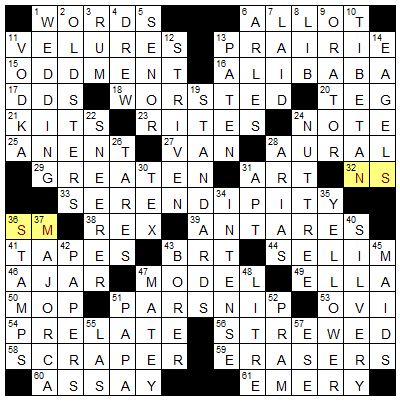 The second puzzle was constructed by Rosalind Pavane.  It was originally published on December 7, 1991, and was recently litzed by Andrew Feist.  The puzzle contains seven rebus squares of BUCK, which is very impressive for a 15x!  All the rebus entries are rock-solid—my favorites are DADDY WARBUCKS and BUCK ROGERS.  Unfortunately, though, the grid is divided into three nonintersecting sections, which is a major no-no.  Nevertheless, breaking this rule allowed the constructor to cram all the rebuses in and still include several lively nonthematic entries, such as  REFEREE and RAZOR.  The answer grid with highlighted theme entries can be seen below: 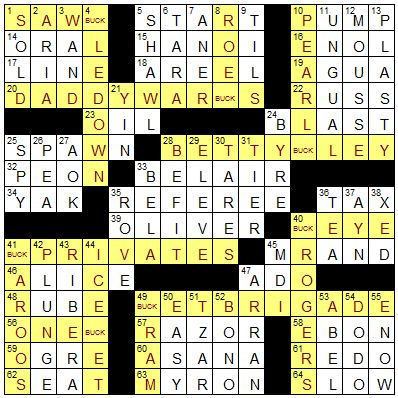 Today's featured pre-Shortzian entry is NOSTOC.  According to the Ginsberg database, NOSTOC has never been reused in a Shortzian puzzle.  It originally appeared in the September 30, 1989, puzzle by Eugene T. Maleska, which was recently litzed by Todd McClary.  The clue for NOSTOC was "Freshwater alga."  Webster defines a nostoc as "any of a genus (Nostoc) of usually filamentous cyanobacteria that fix nitrogen."  Nostic comes from New Latin and was first introduced into our language in 1650.  I wonder how low Todd McClary would score this entry in his word list—it would probably have an even worse fate than INFANT EYES (see his INONESCUPS/UNTHEMELY #27 post), if that's even possible!  Below is a picture of some nostocs on a microscope slide: 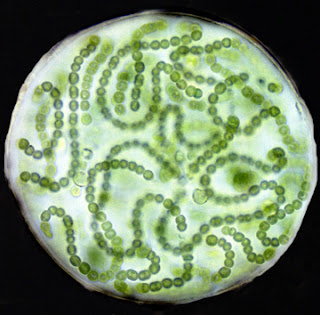 Image courtesy of Connecticut College.
Posted by David Steinberg at 9:34 AM