I'm very happy to announce that we're only 35 puzzles short of 2,900!  After that, there will only be 100 more puzzles to litz until we hit 3,000!  In addition, we only have one more puzzle packet left in 1987!  Since Barry Haldiman's CD contained so many puzzles from 1988 and 1987, we've been able to get through those years much more quickly than usual.  If we continue litzing at this pace, we can be done with all the puzzles in just a few years!

On another note, litzers have come across several puzzles with italicized or underlined clues.  Though Across Lite can't display such clues, XWord Info can.  To italicize a clue, surround it with the html tag <em> on the left and </em> on the right (do not add a space in between the first closing angle bracket and the clue or in between the clue and second opening angle bracket).  To underline a clue, surround it with the html tag <u> on the left and </u> on the right, following the same conventions about spacing as with italicized clues.  Below are two sample clues:

We discovered another humorous typo while continuing to proofread the 1991 puzzles.  A clue for STEVE was supposed to read "Allen or Lawrence" but had accidentally been typed as "Alien or Lawrence"!  (If anyone's wondering, we expect to find typos—litzing is very tough work—and usually do.  In fact, not a single packet has come back without at least one typo.  It's great when they happen to be humorous!)

Today I'm featuring another pair of related puzzles.  These two puzzles had the same theme idea executed very differently.  The first, constructed by Harold T. Bers, originally appeared on November 13, 1954, and was recently litzed by Andrew Feist.  The puzzle contains four elegantly stacked pairs of theme entries.  The inner theme entry in each stack reverses the order of the two words/parts of words in the upper theme entry.  For example, the topmost stack consists of the entries HANGOVER and OVERHANG.  The 11-Down/12-Down stack is slightly inconsistent—LOOKS OUT would have fit the theme much better than LOOKOUTS.  Nevertheless, this puzzle is admirably constructed, jam-packed with theme entries and Scrabbly fill.  The puzzle is also only one letter (Z) away from being a pangram and has many nice nonthematic entries, such as CLOWNED and KOWTOW.  (I have to admit, though, that APTERYX [clued as "Kiwi."] and JALNA [clued as "Home for the Whiteoaks." are bizarre.)  The answer grid with highlighted theme entries can be seen below: 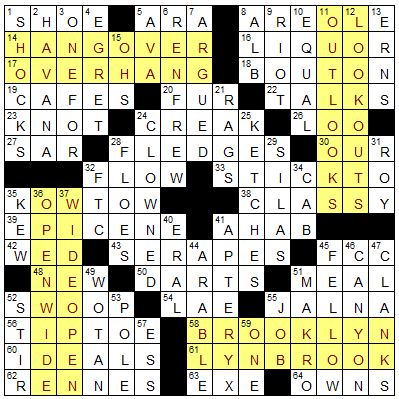 The second puzzle, which was constructed by Bert Rosenfield, originally appeared on December 7, 1989, and was recently litzed by Doug Peterson.  This puzzle only includes one half of each pair of two words/parts of words, and the tipoff is in the cluing.  Each theme clue includes an asterisk.  For example, OVERHEATED is clued as "Fervid: reversal = like leftovers."  The reversal part of the clue hints at HEATED OVER.  Though the interlocking theme entries are very impressive, the nonthematic fill is definitely strained.  Some of the weirder entries include POILU (clued as "W.W. I soldat") and SCEND (clued as "Lift of a wave").  Also, I found it odd that 39-Down wasn't part of the theme since it certainly would have fit the pattern (INCURVES/CURVES IN).  Even with the weird fill, this puzzle is very cool and contains much more theme material than your typical Maleska puzzle.  The answer grid with highlighted theme entries appears below: 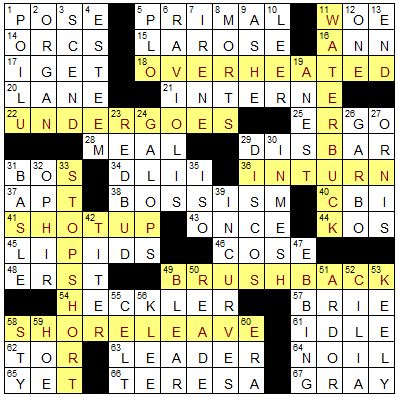 Today's featured pre-Shortzian entry is SIABONS.  According to the Ginsberg database, neither SIABON nor SIABONS has ever been reused in a Shortzian puzzle.  SIABONS originally appeared in the August 17, 1991, puzzle by Kevin Boyle, which was recently litzed by Jeffrey Harris.  The clue for SIABONS was "Hybrid apes."  Siabon is such an unusual word that it doesn't even appear in Webster's Online Dictionary!  The World Book Dictionary, though, defines a siabon as "the offspring of a siamang (genus Symphalangus) and a gibbon (genus Hylobates):  The Siabon combines the physical characteristics of both parents and has 47 chromosomes (Charles F. Merbs)."  I couldn't find a picture of a siabon, so I'm posting pictures of a siamang and a gibbon instead—you can use your imagination! 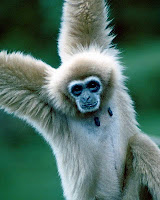 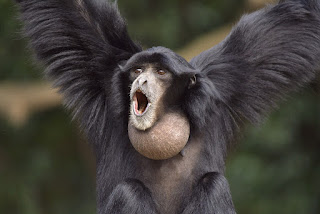