Great news:  Jim Horne has just posted all the proofread 1992 puzzles on XWord Info!  He's still trying to fix up a couple of tricky puzzles, but the rest are ready to go.  Jim has also created a separate section of links for the Pre-Shortzian Puzzle Project, which now has its very own FAQ page and a link to this website.  You can view the pre-Shortzian puzzles here and solve them here.  Thanks so much, Jim!

Needless to say, this certainly couldn't have happened so quickly without the help of all our litzers!  Thank you, everyone!  Together we've now reached 2,600 litzed puzzles!

We've also received some more publicity:  T Campbell posted a wonderful write-up of the Pre-Shortzian Puzzle Project on Amy Reynaldo's Diary of a Crossword Fiend blog, which you can read here!

Today I am featuring two puzzles with very outdated but historically interesting themes.  The first was constructed by Bernice Gordon, who, incredibly, is still publishing crosswords at 98!  This puzzle originally appeared on January 23, 1955, and was litzed by Barry Haldiman (or one of his former litzers).  The title for the puzzle is "Household Words."  It features four appliances that were considered novelties back in the day but that are so commonplace now that we don't even think about them.  My favorite theme clue is "Work of a modern kitchen appliance" for GARBAGE DISPOSAL—it made me laugh out loud!  The nonthematic fill was very clean for the 1950s—I especially like SQUEEZING, NEW YORK, and CYNICAL!  The answer grid with highlighted theme entries appears below: 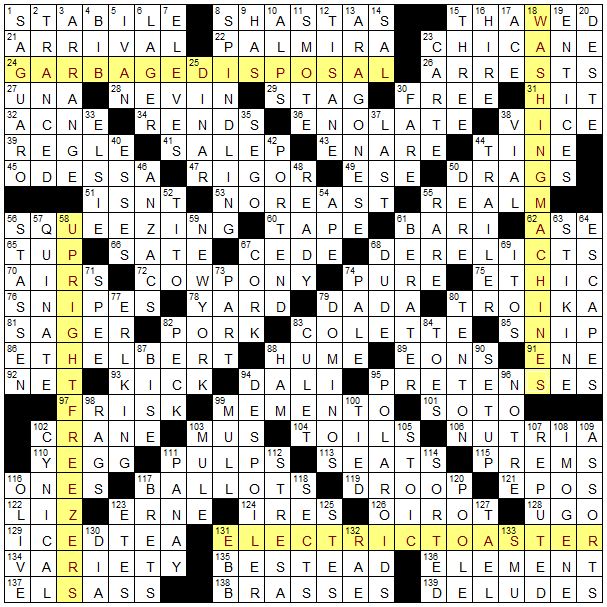 The second puzzle was constructed by Jules Arensberg.  It was originally published on July 11, 1953, and was recently litzed by Nancy Kavanaugh.  This puzzle was published before Hawaii became a state (ironically the fiftieth, not the forty-ninth) in 1959.  Its main theme entries are FORTY NINTH STATE (clued as "Subject of pending legislation.") and HAWAIIAN ISLANDS (brilliantly clued as "Star on the flag?").  The puzzle also included the bonus theme entry MAUNA LOA and had a very nice nonthematic fill.  My favorite nonthematic entries are OPERA HAT and SLAVE ANT.  The answer grid with highlighted theme entries can be seen below: 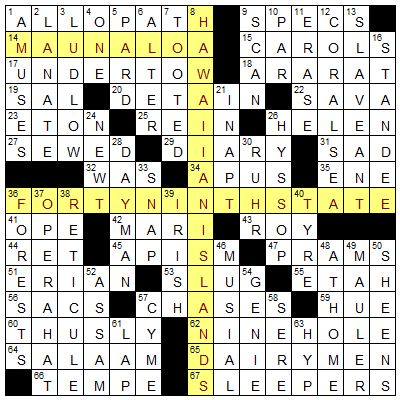 Today's featured pre-Shortzian entry is KAKAS.  According to the Ginsberg database, KAKAS has never been reused in a Shortzian puzzle, though KAKA appeared in a Shortzian BEQ puzzle (clued as the soccer star).  KAKAS originally appeared in the October 7, 1989, puzzle by Bernard Meren, which was recently litzed by Todd Gross.  The clue for KAKAS was "New Zealand parrots."  I've disliked parrot clues ever since I got naticked at the Silicon Valley Puzzle Fest because I didn't know KEAS!  (And recently I came across an entire 1993 Maleska puzzle with a parrot theme!  The puzzle, which can be seen here, even included KEA—gasp!—as one of its theme entries!)  In any case, Webster defines a kaka as "an olive-brown New Zealand parrot (Nestor meridionalis) with gray and red markings."  Kaka comes from Maori and was first introduced into our language in 1774.  Below is a picture of a kaka: 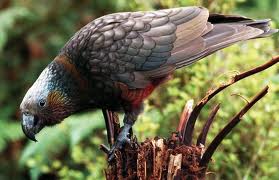 Posted by David Steinberg at 7:55 AM