Ready, set, . . . litz!  Well, not quite, but starting Sunday, September 1, the third litzing contest—dubbed Litzstarter—will begin!  I'm thrilled to announce that for this very special litzing contest, which will run through October 31, we have several great sponsors offering awesome prizes!  (You can navigate to the sponsors' home pages by clicking on their cool logos in the right-hand column.)

This contest's prize structure is loosely modeled after Kickstarter campaigns in that it features a variety of tiers, each of which offers a different reward for "backers" (aka litzers).  Like Kickstarter, we have a precisely defined goal:  to reach 13,000 on the litzing thermometer in two months.  That's approximately 2,000 more puzzles—a bit more than we litzed during the last two-month-long litzing contest, but definitely still achievable!  Unlike Kickstarter, however, Litzstarter's rewards won't be contingent upon our attaining the goal.  So even if we fall short, backer-litzers (or "blitzers"!) will still receive rewards.

Moreover, to encourage "between-tier" litzing, anyone who litzes 14 or more puzzles will receive one virtual raffle ticket for each puzzle litzed and be eligible for the Grand Prize drawing at the end of the contest.  This means that whether you litz 14 puzzles or 1,400, you have a chance of winning this prize.  But the more puzzles you litz, the greater your odds of winning!

Finally, if you qualify for a reward at one tier but would prefer the reward for a lower tier, you can level down and request that reward instead.  Rewards aren't cumulative, though, so each tier doesn't include the rewards of previous tiers.

And now for the rewards, listed in order by number of litzed puzzles:

Thanks so much to all the Pre-Shortzian Puzzle Project's generous sponsors!  If you haven't done so already, check out all the great Puzzazz e-books (which founder and CEO Roy Leban has made sure are jam-packed with terrific puzzles) and Rex Parker's [aka New York Times constructor Michael Sharp's] inimitable crossword blog!  And if you'd like to fill your life with all things crossword, be sure to subscribe to XWord Info, the massive database of New York Times crosswords created by former Wordplay blogger Jim Horne and now administered by New York Times constructor Jeff Chen—it's chock-full of invaluable statistical data, analytical tools, and useful commentary.

Finally, even if you don't win the Grand Prize drawing, do everything you can to attend the ACPT, New York Times crossword editor and puzzlemaster Will Shortz's totally awesome three-day crossword extravaganza of formidable puzzles, wonderful people, and a lifetime's worth of memories!

A few last words about the contest:  Litzstarter is open to everyone, including contest sponsors, though if you haven't litzed before, please contact me for detailed instructions.  You must use construction software or know how to litz in text files.  Contest totals will be updated as frequently as possible; to see them, click on the Contest Totals tab above.  Packets typically contain 7 puzzles, but some may have fewer; you may ask for more than one packet at a time (up to a maximum of 10), but please do not ask for more packets than you'll realistically be able to complete either by the end of the contest or shortly thereafter.  As you finish the packets, send them in and let me know if you'd like another (or several others).  Near the end of the contest, if you are only partway through a packet, simply send in the puzzles you've already litzed—they will count toward your total.  Remember, you must litz at least 14 puzzles to be eligible for the Grand Prize drawing for a free ACPT admission!  The Grand Prize drawing winner will be announced on November 1, 2013.


On to the project update:  Great news—we've passed another major milestone:  11,000 litzed puzzles!  Litzers seem to be flexing their muscles before the contest begins!  On Friday night, Jeffrey Krasnick sent in 7 puzzles.  Saturday morning, 10 more proofread puzzles came in from Todd Gross.  Saturday night, Mike Buckley sent in 7 more litzed puzzles, which were followed by 14 more puzzles from Mark Diehl on Monday morning.  Tuesday afternoon, Denny Baker sent in 7 more puzzles.  Thursday evening, Howard Barkin sent in 14 puzzles, which were followed a few hours later by 14 more from Mark, putting us over 11,000 on the litzing thermometer!  And then this morning, Todd sent in another 10 proofread puzzles.  Thanks so much, everybody—great job!  Now it's time to gear up for Litzstarter!

Today's featured puzzle was constructed by McElroy (whose first name is probably Hugh).  This bizarre Maleska-edited crossword was originally published on August 2, 1977, and was litzed by Joe Cabrera.  Like the featured puzzle from two weeks ago, this puzzle is another unusual tribute to the alphabet.  The puzzle's three amusing theme entries are AAAAAAAAAAAAAAA (clued as "Electric-typewriter overtouch"), BBBBBBBBBBBBBBB ("Ms. Stonefinger strikes again"), and CCCCCCCCCCCCCCC ("Heavens!  Why isn't she a riveter?").  In addition, the constructor included ABCS ("Basics") at 1-Across, which isn't clued as a theme entry but serves as a reveal of sorts.  I wonder if the constructor intended for DEFI to be a part of the theme, since it has the next three consecutive letters after ABC.  Either way, I love the theme's eccentricity, and the theme clues are hilarious!  I'm a little surprised that Maleska published this theme, though, since it feels much more in the style of Weng.  Perhaps this was one of the leftover puzzles that Weng had already accepted before passing the baton.  In any case, the fill is also extraordinarily clean considering how many consecutive Bs and Cs the constructor had to work with.  I especially like the entries APLOMB, BALZAC, CHARITABLE (clued as "Eleemosynary," a former entry of the week), and the old-fashioned BABY FROCKS!  In fact, the whole middle section of the puzzle with all the Bs feels particularly elegant; also, I like that the grid includes two long nonthematic down entries, a trend that didn't become a regular feature of thematic puzzles until much later on.  The only two entries that really give me pause are the not-so-great abbreviation RCAF (Royal Canadian Air Force) and DEFI (assuming it doesn't function as part of the theme and is simply the French for "challenge").  Canadian litzers Jeffrey Krasnick and Martin Ashwood-Smith may disagree with me on the former, though.  In all, this is a stupendous pre-Shortzian puzzle!  The answer grid (with highlighted theme entries) can be seen below: 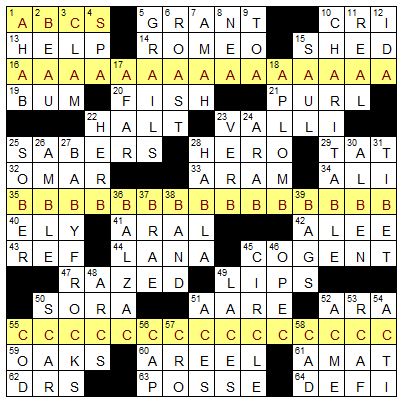 Today's featured pre-Shortzian entry, USQUEBAUGH, originally appeared in the October 10, 1967, puzzle, which was constructed by William Lutwiniak, litzed by Mark Diehl, and edited by Margaret Farrar.  According to the Ginsberg clue database, this unusual word has yet to appear in a Shortz-era puzzle.  The original clue for USQUEBAUGH was "Whisky, Gaelic style."; Webster simply defines usquebaugh as "Whiskey," though it does include the Irish & Scottish dialect tag.  Webster goes on to mention that usquebaugh comes from the Irish uisce beatha (water of life) and was first introduced into our language in 1581.  We also get the word whiskey itself from this Irish phrase and from its Gaelic cognate uisge beatha.  When I'm 21, it would be fun to walk into a bar and order some usquebaugh just to see the confused look on the bartender's face!  For now, here's a picture of some homemade usquebaugh: